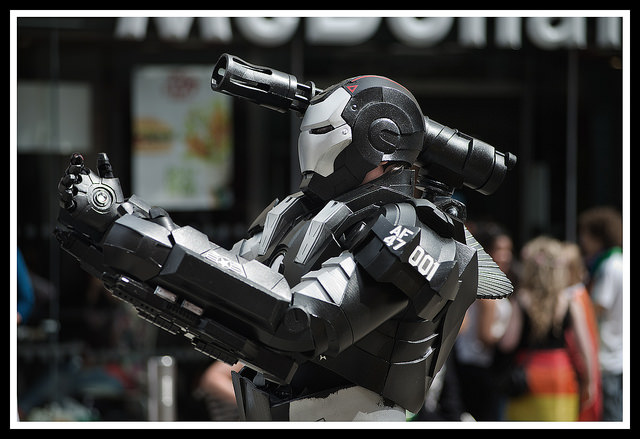 Have you noticed that the police officer on the corner, attending an accident, or answering a call to a residence, looks like more of an officer from the army manning the front lines in Afghanistan with a holster full of weapons; multiple magazines, handcuffs, batons, pepper spray, a taser strapped to the other leg, and a very obvious bullet proof vest. And if all goes according to plan, he or she may soon have a Colt 8 carbine over his shoulder, capable of firing long range at 750 to 950 rounds per minute.

Is it happenstance that the police in the last few years have chosen the nomenclature, and dutifully launched, the “war on drugs” and the “war on terror”. Our street cops have become warriors, prepared for an all out assault on the street.  Call of Duty wrapped in the guise of “officer safety”.

Do you feel safer? You shouldn’t.

The Americans, those lovers of the 2nd amendment, seem to have started this trend, which seems to date back to the riots of the 1950’s and 1960’s, and specific incidents such as the 1997 shootout in North Hollywood with the Los Angeles Police Department.

Of course this militarization of the police departments, has not exactly gone according to plan, and this increase in armaments, seems to have been co-joined with an us versus them mentality.  The predictable result is the now increasing scrutiny in U.S. police departments, and the examination of a number of shootings, where, lets just say, some of them have been questionable. It is usually where the threat was perceived, not real, but later articulated in such a manner as to make almost any movement or irregular movement suspect. Police credibility is at a dangerous low ebb.

And the Canadian police dutifully watch and follow their American counterparts, often with envy, never questioning the need for further guns, nor the number of lights that you need on a police car.

It is not going unnoticed by some for quite some time. U.S. Law Professor Peter Kraska in 2007, studying the phenomena came to the conclusion that  “civilian police increasingly draw from, and pattern themselves around the tenets of militarism and the military model”.

One of the latest incidents in Ferguson, Missouri is now drawing new attention, eliciting protests, black versus white comparisons, and footballers kneeling in protest at NFL games.

The journalist Glenn Greenwald (who broke the Snowden disclosures) writes in an article in the Intercept that he believes that it is the by-product of “several decades of deliberate militarization of American policing…a trend…a steroid injection of …a federal funding bonanza all justified in the name of Homeland Security”. He goes on to say that they have created a “domestic police force that looks, thinks, and acts more like an invading and occupying military…than a community based force to protect the public”.

All this in a time of decreasing violent crime statistics in Canada.  In 2013 the crime rate was at its lowest since 1969.

So why is this happening?

I think there are three reasons: the police and police managers clearly have fallen in love with the t.v. versions of themselves, and have been heavily influenced by what they see in the South; they have lost sight of what it actually means to be a police officer, and what their role actually is, which is the neighbourhood cop. The person behind the badge has become removed, hidden behind Vuarnet sunglasses, made distant from those that call for his or her service.

Secondly, and more importantly,  there has been a mindset developed whereby “officer safety” now dictates that there is a cone of safety around every officer, the physical interactions, acceptable in the bygone eras have been replaced by  “threat assessment ” tools; designed to eliminate or avoid the use of any kind of physical contact between the officer and the suspect.

And finally, coinciding with the “officer safety” mandate, and something not often talked about, was the removal of height and weight as a requirement for police officers. The “little police force” as the RCMP is sometimes called, was born.

Gone were the Saskatchewan and Nova Scotia farm and fishing boys, and on to what they believed would be the more sophisticated and educated officer.  But the thinking was that those applicant officers were being impeded by a height and weight standard; that to deny anyone a job because of a physical trait was patently unfair, especially if the goal was in terms of hiring more female and ethnic officers.

There was no consideration given to the value of a “physical presence”.

This seemed laudable, and made sense to the academics and the Federal bureaucrats running the RCMP, but it did not make sense to the street cop. Size matters in policing, and to say otherwise is delusional.

So how do you make up for this lack of a physical presence if officer safety is paramount? Well, you keep increasing the amount of tools which can act as equalizers. A 5 ft 4″ , 110 lb. officer when confronting an abusive drunk can equalize the situation by using pepper spray, the taser, or whatever other tool is hanging from their belt. It clearly escalates the situation, but the officers of today are being taught, that anyone infringing on their zone of safety, by its very nature, increases the perceived or real threat.

In a recent court hearing in Moncton, New Brunswick the RCMP was found guilty of one count in the Labour Code in that they failed to provide officers with use-of-force equipment, namely the C8 carbine, all of which came from the fallout from the tragic events in Moncton New Brunswick in 2014, where three uniform officers fell to sniper Justin Borque who lay in waiting.

RCMP officers believed and testified during the Labour Code hearing, that they were “out-gunned” and that they needed and should have had access to the C8 Carbine. One constable testified that when he encountered Bourque,  if armed with the carbine, he would have had the ability to “engage” with him and possibly bring the shooting to an end, possibly saving one of the officers.  Two officers had already been killed by this time, but he thought he may have been able to save the life of the third.

The C8 carbine had been recommended after another tragic ambush in Mayerthorpe, Alberta and had been approved for use in 2011. Not surprisingly, there was a slow followup in terms of training and getting the weapon in the hands of the uniform officers.

In Moncton, massive panic, miscommunication, and lack of supervision was evident once the shooting started, and as Bourque moved through the neighbourhood, there was no countering police response, officers simply kept driving into the scene; even the ambulance was directed through the “hot zone”. Nobody seemed in control of the police response. It was indeed a horrific case for the officers involved,  and not a circumstance that is often encountered in policing. Very few officers would be prepared for it.

Commissioner Paulson by way of explanation, testified that the delays in the implementation of the C8 carbine were due to the raised concerns about the militarization of the police.

Like Paulson, I do not believe that the C8 carbine would have saved the officers lives.  The officers were up against a determined individual,  a “lone wolf”, one who came fully prepared with ammunition and weapons and had decided to go on a killing spree.

There is a stark reality here though, one faced and thought about by every police officer leaving their residence, and that is that there are a few situations which police encounter, where no amount of training, no amount of weapons on your gun belt or slung over your shoulder is going to make any difference. Luck will need to be on your side. To think otherwise is also a deception.

The Moncton shooting was no different than Mayerthorpe. They were all gunned down by a sniper that got the drop on them.

Should the RCMP be guilty of the Labour Code violation. Of course. They were directed to introduce the C8 carbine as a recommendation, so they “studied” it, and like any other Federal department were extremely slow in getting things in motion.

But I also think that Paulson  was right to be concerned about the “militarization” of the police. The .308 rifle went into disuse as a city weapon a number of years ago, because there was no control where the rounds would go with such a powerful rifle, and as one instructor said, you are not going to be shooting someone a 100 yards away.

Now, apparently the C8 with its power and range is ok. God help us if the uniform officers of Whalley or Langley open fire with a C8 in a residential neighbourhood.

It should be noted that conveniently, Canada does not keep track of the number of officer shootings, and not all the police forces in the U.S. contribute to their national studies.

But the anecdotal evidence seems to be mounting, that officers in Canada, like their American counterparts are being a little to quick to escalate the situation in certain circumstances, that there training and their safety zones, are in fact catalysts to a rapid escalation of violence.

In speaking with a member of the IIO, when I asked whether I was just imagining how many shootings there were, he confirmed that there has been a drastic increase in shootings, not all fatal of course, and that these shootings were from a perceived increase in threats to officer safety.

We are still way behind the U.S. where there have been 766 people shot and killed by the police in 2017. One in five of those killed were suffering from some form of mental illness. By the numbers, more people are killed in the United States in a few days than in a few years in Europe.

Twenty-five years ago, it was unusual to hear about the police shooting someone. It is almost a weekly occurrence now.

Simply put, if the trends continue, we are going to see more shootings, and by normal reasoning we are also going to see more people dying at the hands of the police when it may have been unnecessary. The grief this brings is not just to the victim, it also effects the police officer in a life-changing way. No officer wants to be involved in a shooting.

But we have become enamoured with the U.S. police style. We are bombarded with U.S. police images, and we seem intent on emulating it. Canadians are led to believe that we are one and the same, that the police need the carbine rifles, and the armoured police vehicles, the helicopters, and the heavy duty flashlights. We have developed the police/military strut.

As the U.S. police are coming under greater pressure now because of the tendency to shoot, maybe its time Canadian police took a step back from this increased military mirroring,  and maybe try to get back to a police presence as imagined by Robert Peel, rather than General Patton.