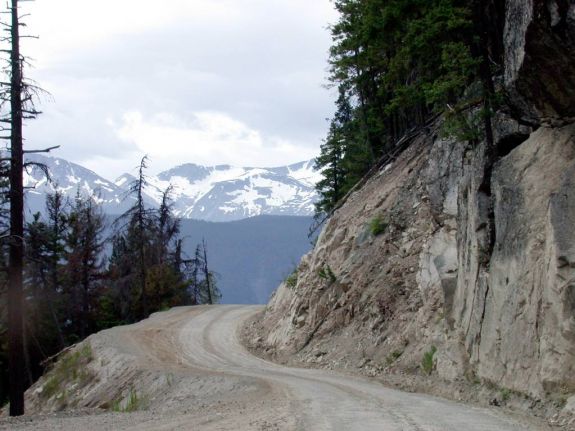 As the late admired journalist David Carr said when asked about his journey from crack cocaine addict to NY Times reporter, he explained that indeed he had led a “textured life”. It resonated with me, in that my life has not been a straight line, maybe not even a crooked or jagged line. There has been no A to B followed by C; no real planning, no career to wife, house, children and the apparent ultimate goal of mortgage free retirement.

It was just one of these unconventional, somewhat twisted career moves that led me to an isolated rain soaked valley, one which literally sat at the “end of the road”.  Comfortably nestled in isolation, pushed up amongst the coastal mountains lies the village of Bella Coola, my third posting in what was then a still young career. I was going there from living and working in downtown Toronto; within 48 hours transitioning from a surveillance assignment on Yonge St., only to find myself standing in front of the nondescript police detachment on MacKenzie St. in Bella Coola, British Columbia.

If you should choose to drive there, turn directly west on Hwy 20 from Williams Lake and begin your drive, across the sparse Chilcotin plateau, periodic marshy lakes interrupted by seemingly never ending patches of cedar and spruce. You will gradually enter a new, sometimes forgotten world, winding through sparsely settled Alexis Creek, Riske Creek, and Anahim Lake. A still wild land, untouched, ignored for the most part by the rest of the Province.

After 4 or 5 hours, the Coastal Mountains begin to frame the horizon and you think that you must be near the end when the asphalt abruptly turns to dirt. Most are usually not prepared for this final phase, one where you begin to descend into the Valley. You are now on the “Hill”.

This “Hill” (in any other place it is a Mountain) is a sometimes one-lane dirt road, descending 4020′ over 19 kms, with road grades of 15-18%, nicknamed, inadvertently tongue in cheek, as the “Freedom Road”. Denied government funding local citizens in 1952 took it upon themselves to complete this highway connection, one that government engineers said was impossible. Stubbornly, armed with brashness and bulldozers these rugged individuals pushed it through on their own and “freedom” and access was gained to the rest of the world, or at least that small part of the world which allowed an exit from their isolation.

So it was that in 1984, I found myself standing in front of the brick, flat-roofed square detachment, a townsite surrounded on three sides by mountains, the sides of the valley about a mile away. Cloud cover, I learned was never far away, often hovering at 1000 feet. A box designed by nature, unable to see too far up, or too far to the sides. The rain feeds the dense forest, its foliage of hanging mosses and green carpeted limbs make it almost impenetrable.

Tourism now seems to be supplanting the days of logging and commercial fishing which were the original economic engines, and Norwegian settlers from Minnesota, began living side by side with the Nuxalk First Nation.

The centre of town, is about 300 yards long, with the central road dividing the Reserve from the “white” side. There is a Co-op grocery store, Kopas’ General Store, and the hotel restaurant which was then the Cedar Inn.

The Reserve is three or four rows of sub-standard housing, ill-fitting doors, a variety of window coverings, from flags to plastic bags. Dogs running in groups, lazily stirring in driveways or yards if provoked.

Few are making a living “off the land”, struggling teenagers fully aware of life on the outside, consumed much like their city counter parts with all that is playing on large screen t.v.’s. Everything that they want achingly out of reach.

There are no jobs to speak of, generations of welfare and isolation further further quelling any chance or desire for economic freedom; other than the usual small town government employment. In re-visiting a couple of years ago, depressingly, nothing has changed, although the police now live in a rather large conspicuous yellow modern styled building. An ignoble and incongruous bus shelter, now sits on the main drag, and appears to be the only other new addition in 30 years.

It was here my two year “isolated post” began.

And It was here, in these surroundings, that I found myself that first Xmas Day in 1984. Alone for the holidays as the other three officers like most of the residents of Bella Coola, had left town for the holidays. Besides being the only cop in town, the only breathalyzer operator, the sworn in sheriff for civil action, I was the holder of the keys for the local garage should a tourist run out of gas during the holidays.

The rain pelted down, bouncing off the pavement, and as I looked out the front detachment window, there was not a sole in sight, not even a passing vehicle. Clearly, those that were around, were now content to surround themselves with family in their respective houses as it neared Xmas dinner hour. It was getting dark at 2 in the afternoon and the sides of the valley had already begun to close in. I stood there in my ball cap, uniform shirt, and jeans held up by a holster pondering how to pass the time.

A Xmas tree, which I had proudly felled myself days before, was laying on the back porch, yet to be brought into the house. There seemed to be no point in bringing it in, especially when I had just discovered that there were no decorations to speak of anyway. With the greenish shag carpet in the living room, and no decorations, it would have looked ridiculously more like a tree having grown up through the floor. It stayed on the porch.

Xmas dinner had not been planned for either, the local restaurant was closed, the only day in the year which received this honour. Not wanting to be alone with thoughts of Xmas’s from the past, I decided that I would take a patrol of the townsite and the area further up the Valley; more out of boredom than diligence. I backed the police car out of the carport, put on the defogger and the windshield wipers on full force and began the usual rounds.

A few lights shone in the houses on the Reserve, but the rest of the town site had become ghostly, little signs of life, the odd and sparse string of Xmas lights blinking at the Co-op and the Liquor Store entrance ways, their closed signs stating the obvious hanging in the doorways. I decided to head up the highway, up towards Hagensborg.

Hagensborg is just a small collection of houses, a small convenience store, a bar and a faded yellow clapboarded bowling alley.

As I drove slowly by, I could clearly see a light on in the bowling alley, near the front of the building, which served as the coffee shop and catered to the bowlers. I couldn’t be sure but this seemed out of the norm having driven by on the single road highway many times. It had been vacant in previous years, but I had heard that some people had recently bought it, and trying to make a go of it. The rumour was that a “homosexual” couple were escaping Vancouver and the burgeoning AIDS epidemic, escaping to nature, escaping to where the disease would not find them. Why else would someone who was “homosexual” move to Bella Coola, at least that was the local scuttle butt. Bored, and having lots of time on my hands, I thought I should rattle the door handles, just to make sure it was ok.

The rain was incessant, stinging the bridge of my nose, as I climbed out of the security of the police car, and went up to shake the front door, not really expecting an answer.

The door suddenly opened and a middle aged man, with a slight paunch, dressed in khakis and a flannel shirt framed the doorway. “Hello officer” and I was hit with the smell of roasting food and the warmth of the insides flowing out. “Hey, come on in, come in” gesturing and opening the door further.

A couple of steps in as I was muttering something about not wanting to disturb them, that a second man appeared coming out from deeper inside the cafe. A similar aged man, a dress shirt over jeans, short perfectly groomed hair, smiling broadly, and with a pair of clearly used oven mitts on both hands.

I began to explain again that I was checking on the property, when I felt myself being swept up by the effusiveness of the two. Without waiting for an answer, they told me to have a chair, directing me by the arm, to have some dinner with them. “After all…” they had cooked a goose and had more than enough to go around, the deliciously browned bird sitting prominently on the counter, proof of their apparent predicament and the need for company. They both talked at the same time, resisting seemed futile, despite my “not wanting to impose”.

So I sat as minutes became hours, and I listened. They talked about their previous life in the city, why they came to Bella Coola, what they loved about the place, what they hated, their backgrounds, the bowling alley being a dream of owning their own business, Xmas, and plans for New Years. Their voices seemed as one, and as I sat, I was enveloped and drawn into their kindness. It was an atmosphere usually reserved for long friendships.

I ate sweet dark goose meat, mashed potatoes, gravy, stuffing, vegetables, sitting near the picture glass window, the heat inside causing condensation to form on the single large window, the rain noisily pelting the glass, the abandoned dark bowling lanes off to my left, the police car once in a while shimmering in the flickering light a few yards away in the darkened outside world. How did I get here, how did I come to be sitting in this pinpoint of light and time, at the end of the road, eating what I remember as one of the best meals I had ever eaten, eating with two people who were strangers 30 minutes before. One of those jagged turns in the road.

And 34 years later, I still remember those two gentlemen. I don’t remember their names, but I remember them. I picture the scene that night as if it were yesterday.

They didn’t last long in Bella Coola, maybe another year or two, and then they were gone like they came in; without a word or anyone expressing surprise that they had left.

Every Xmas I think of them, who are probably in their 80’s by now. I do hope and believe that they survived. I picture them sitting down for another Xmas dinner, happily reminiscing about the year or two they spent in Bella Coola; remembering the year they had that “young” Mountie in for Xmas dinner, the Mountie who had taken the time to check on them.

Merry Xmas and a Safe New Year to you all, and thanks for reading.

11 thoughts on “A Christmas at the end of the road…”