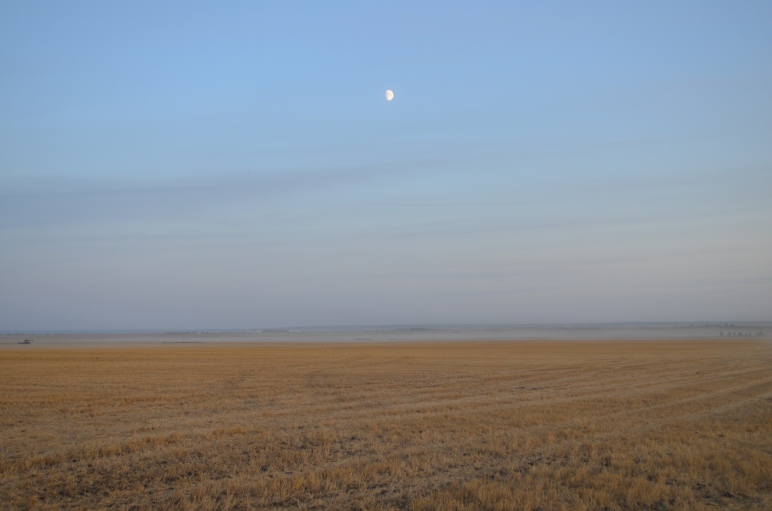 This dispatch is coming to you from the Prairies, a bit more personal, more of an observation.

This is coming to you from what seems like a different world, a different topography, a different agenda. It’s a world where discussions often centre around the direction of the winds, and the ever-changing weather that those winds bring. At this time of the year, the winds are beginning to blow cooler over the wheat and canola fields, the sheaves have already been laid over, now waiting to be gathered. It is the time of the year for the annual dance with Mother Nature.

The “bins” and grain elevators stand like sentries at each dusty village or town site, anticipating the impending crop arrival. A harvest moon slowly rises in the late afternoon, highlighting the changing Fall colours of the birch, aspen, and balsam trees which lay in long lines, deciduous dividers of the farmers fields, encircling the homesteads.

One can not help but be staggered by the difference and beauty of this part of the Canadian mosaic, this lifestyle which has been harrowed out of dark rich brown fields of dirt for over a hundred years. It’s big sky country. It is such a polar opposite universe to the lifestyle found in the assorted cities across this country. Little has changed here, technology has pushed equipment advances, but the standards remain the same; hard work and perseverance are still the determinants of outcome.

Meanwhile in that other more common world, a seemingly more complex world, Ottawa and the big metropolises of Canada are now poised and have swung into election mode. The farmers watch from a distance, with both frustration and amusement. A slightly raised eyebrow often serves as a statement in its own right.

From the perspective of the plains, looking to the East, the politicians seem to be speaking in some form of language which is not easily understood by those working with and who are closer to the ground. It’s a language which seems foreign, somehow distant from reality, or at least distant from the experience of these folk. Two separate conversations, going in different directions, taking place in different parts of this country. A growing chasm in political thought and point of view. Two disparate groups.

There is an inherent distrust. When one questions or attempts to explore the roots of the these farmers suspicions– it seems to point to one thing–a perception of a fundamental lack of honesty amongst the ruling elite. They believe that there is a basic, maybe insurmountable misunderstanding, of the needs and wants of this agricultural world.

The farmers sit in the local coffee shop, where the kibitzing and haranguing of the others who join them often interrupts the more serious talk. It’s 6:30 a.m. and they huddle around a Tim Hortons coffee. It’s a bond and a dialogue developed over many years, their wrinkled hands and sun and wind browned faces proudly showing the signs of age and hard work. As they gather in the booths, it is an easy friendship, dry wit, interspersed with sparse caustic comment. And it is here, where you get exposed to the bare, often raw truths.

As we have now entered the period where the politicos have 40 days to bombard the rest of us with fatuous ads, make hundreds of promises and cater and appeal to all those city folk who hold the real power.

These two groups seem to be on an inevitable collision course. They feel that in the end they are destined to be crushed by the weight of the majority. In the political power pyramid their votes are only a small portion of the population; their wishes pale in comparison to the 905 area code or to those in the French speaking parts of the country.

They feel that the general public is being fed a narrative which is simply untrue. That political correctness has wiped out the ability for open and honest discussion. They do not feel that there is room for them, that the dialogue swirls around them and like a prairie dust storm, touches down briefly, wreaks havoc, and then leaves.

They ask continually as to why the media won’t report what is actually going on, not what the elites and the cognoscenti want us to believe is going on. They believe that the media is part of that mainstream stream of consciousness which has been co-opted.

This place is a long way from the issues of climate change and ride hailing. There are no Teslas parked in the gravel lot, just F-150’s and Chev pickups covered in the dust of the fields. Working vehicles, no polished chrome. The NDP promise lower cellphone plans, they just want cellphone coverage.

Grain prices and the latest issue of the U.S Department of Agriculture which reveal the American anticipated crop yields is much more important, more important than the CBC or CTV news out of Toronto. Prices, yields, and the weather are the talking points for many of the conversations, but the fundamental moral of most of the stories is always similar, not unlike the fishermen on the East Coast– its about the money being made in the middle. The shippers, the buyers, the retailers all making significant money whereas the growers and the harvesters cling on with reduced or diminished prices.

The canola embargo by China is not effecting the city folk, or at least in a significant way, but it is hurting these folk.

Rural crime is often a topic of conversation. When one asks about the police, they swing their arm around gesturing to the outside wide world, “Do you see any?” they ask.

When a background television on the CBC talks about the latest round of monies being given to the Indigenous it is an issue with serious resonance in this part of the country. A flash point. They shake their heads and mutter a few remarks under their breath because even here, in this conclave of white rural Canada, they realize they can not speak freely; there is no free speech when it comes to certain issues.

No one, when they are pressed for an explanation, they believe, has the ability to be forthcoming on what they see in the indigenous communities; the ever multiplying birth rates, the local hospital emergency rooms filled with the indigenous and their babies, and the constant referral to residential schools as a full justification for massive crime and incarceration rates.

Is this racism? When one actually listens to the words and the anecdotal stories, it seems deeper and a little more profound. That explanation is too easy, the racist card is candy to the media establishment, no one seems interested in digging deeper.

This group have the strongest of work ethics. To them, not working or not providing for your families is the lowest end of the expectation spectrum. To not work hard, to rely on others is both foreign to them and is morally repugnant. There is a flint edged pride in cultivating a living from this often harsh land.

The Indigenous claims of nationhood and their constant referrals to ceded or un-ceded lands does not resonate here. The constant monies being fed into a system to support economically unfeasible communities does not make “common” sense and therefore does not make sense to them.

In their view, their own ancestors settled this country and are just as much an intrinsic part of the foundation of this country. The history books are filled with stories of unbelievable hardship in trying to cut out a living, a free section of land worth dying for. In their eyes you can see the hereditary determination. Their hold on this land was earned. No one is going to take it or give it away.

And of course the biggest comeback to the politicians is “Who is going to pay for all this? Cents and dollars are measured here in a bushel of wheat, so they know the value of a few cents, a few dollars.

Round and round the conversations go, but then a train rumbles close by, interruptive, the sound drumming out normal conversation, rail cars full of oil gently sway by, hundreds of rail cars in procession, destined for the refineries on the coast.

The irony of all this oil going through the middle of these small rural towns, in clearly a much more dangerous way than through a pipeline, can not be over looked. One wonders if these trains were rumbling through Burnaby, Port Moody or Elizabeth May’s riding of Saanich-Gulf Islands, whether the debate and the protests would be the same. The farmers sitting around the tables pay little attention, shrug it off, it’s just the way it is. Just another example of the political rhetoric slamming up against reality.

So as the winds cool and begin to switch to the northeast, they begin to blow a little stronger and rain seems to be in the air. The farmers get up from their tables, sore backs eliciting mumbled moans as they push back their chairs and begin heading back to their labours. It is a grudging labour of love, it is hard labour, and it is relentless.

Who is going to take their place? Their children are reluctant to commit to a life of seven day work weeks and paycheques dependent on the weather. Even they don’t blame them.

Are we witnessing the end of an era? Maybe. Life and death are more evident here, more accepted, maybe because of the interdependence of nature and the four seasons. Although, it is hard to imagine a world where everyone is a government employee or conducting whale-watching tours.

The election will come and go, politicians will promise and then renege or back away on those promises. It means little to these farmers.

For the most part, they just want to be left alone, left to their land– the duality of the land which has been forever filled with both promise and hardship.

It is indeed humbling to be around them.

Photo courtesy of the Author.