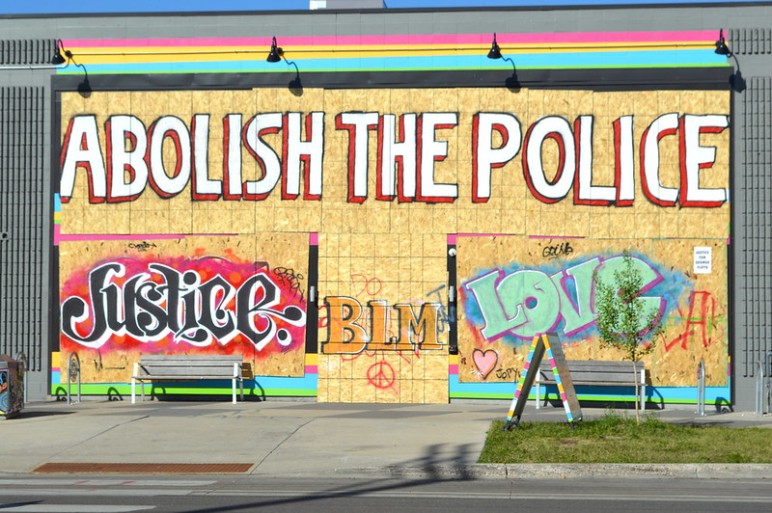 This is a policing story, or more accurately a story about how the police should police. The resulting judicial action in this story should send a chill down the spine of all officers. It may even require you to re-assess your career choice.

This story originates in that bastion of polarized viewpoints and guileless political pandering that makes up those fifty states and one District to the south of us. The theory is that if you want to predict upcoming policing developments in Canada you usually don’t need to look much further than to our brother and sister officers in the U.S. of A.

At first blush it is easy to point out that the atmosphere in the United States and in Canada over the last couple of years would not be one that has conjured up positive attitudes to the police. With Trump gone (albeit astoundingly threatening to come back) Uncle Joe has now found his new left social conscious. We are watching as he and Justin, holding hands, run to the social democratic cliff like Thelma and Louise. Their audience and intended target for their attention and genuflection, and hopefully they assume their votes, is anyone who is in a minority– take your pick.

We mimic their police in our garb and militarization, our stance indistinguishable from our Southern neighbours, so it is natural that we also suffer the consequences of policies designed to curtail the authoritative nature of policing or when things go wrong. We copy but then express surprise at the negative consequences.

The George Floyd incident in Minnesota left those already convinced of racism at every level spitting in rage and indignation. It sparked the de-funding police movement, and it sustained the belief that all police are systemically racist and ill-intentioned. The black community demanded justice at this the latest outrage, and rioting swept through the country. When the charges were laid against Derek Chauvin, there was a palatable fear of an acquittal by the government overseers of the police. The evidence as a result became secondary– a show trial was demanded, granted, and delivered.

Did George Floyd deserve to die? He did not. Was it intentional murder was then and remains the relevant question; the question that many are afraid to voice in this climate of angered throng justice.

Despite our differing histories, the after shocks in Minnesota and Portland Oregon were borne along by the allegedly shocked media, travelling unabated and unquestioned into this country.

Defunding the police, Black Lives Matter, “systemic” racism and uncontrolled cries of victimization, now resonant and rebound off the walls of government committee rooms on Municipal, Provincial and Federal levels. All allegations no matter how outlandish are now met by nodded knowing assurances from our politicians and their constant pledges of forthcoming change. Apologies have become an art form. To do otherwise, to even countenance the merits of an argument, is met by denunciation and ridicule.

So now the George Floyd case has produced another unjust and unreasonable outcome.

I am speaking of the conviction of the three officers who were also in attendance during the George Floyd arrest.

Two of the three officers were rookies, brand new to the topsy-turvy world of policing.

They were convicted of failing to intervene and prevent officer Chauvin, the senior officer at the scene, from kneeling on the neck of George Floyd on that dark day in May 2020. In essence they were convicted of failing to save the life of George Floyd. It was the proclaimed truth that Mr Floyd was in fact being “murdered” in front of them, and they did nothing to stop it.

Even the NY Times described it as an extraordinary “rare” example of the Justice Department prosecuting officers for their “inaction”. The Times also stated in typical rarefied righteous Liberal thinking, that this was a “signal” to the police– that “juries may become more willing to convict not just officers who kill people on the job, but also those that watch them do it”.

The officers, Tou Thao, age 36, J Alexander Keung, age 28, and Thomas Lane age 38 had apparently violated Mr Floyd’s constitutional rights by not providing “medical care” when he lost a pulse–two were guilty of not intervening to stop a fellow officer from planting a knee on Mr. Floyd’s neck. Even though there was evidence at the Chauvin trial that this was a police taught restraint technique.

Keung and Lane during the incident assisted in the arrest and had wrestled with the resisting Mr. Floyd on the ground when he was being handcuffed. If you watched the video and who hasn’t, Mr Thao was the one standing some distance away –trying to keep the crowd from interfering.

The officers could be sentenced to life in prison.

If that is not enough, they are also facing other charges of aiding and abetting a murder and have another trial scheduled for later this year. If you ever wanted to see a legal dog-piling of charges; this is it.

Of course, there is a huge problem with this verdict. It is illogical. It is naive and it defies common sense and observation. It comes from an ivory tower perspective and a viewpoint one where reality never dares to come into focus.

It is entirely hinged on the belief that the officers knew, or should have known that officer Chauvin was “murdering” George Floyd. Again, if one watched the video that was played across the nation every 15 minutes on the cable news networks, there was no evidence in the officers reactions that would support this theory.

One must also remember that an ambulance had already been called to attend to Mr Floyd. If you were witnessing, condoning, and sanctioning a “murder” would you be calling an ambulance? Would you intentionally kill someone In broad daylight with several onlookers– who were willing to film it and even though someone was getting “murdered” –did not think they should intervene?

It completely defies reason– except in a court system which in recent years in the United States has become distorted and warped by the winds of political expediency. Somewhere along the line the judiciary lost the ability for judicial reasoning.

Joe Biden has promised and is on the record as saying that he was going to be more aggressive in prosecuting civil rights violations. This Civil Rights Act of 1964 was passed by Lyndon Johnson and was an act which “prohibits discrimination on the basis of race, colour, religion, sex or national origin”.

In this case, the jury had to be convinced that the officers actions or inactions was based on racism. It was because Mr. Floyd was black, not because they were responding to a complaint about Mr. Floyd. Yet, again, there is no evidence whatsoever that was introduced at the trial which gave rise to an allegation of racism. For the record, Mr. Keung is Chinese, Mr. Thao is Vietnamese.

But Biden and the Justice Department is playing to those that elected him as the Democrats struggle to keep the votes for the upcoming Senate and House Elections. If he was going to look forceful to the black vote to which the Democrats now desperately cling, George Floyd presented the first high profile case where he could flex his political muscles. It is this same desire which made him announce ahead of time that he was going to appoint a black woman to the U.S. Supreme Court. No matter the rightful logic, announcing it ahead of time was pure politics, he couldn’t help himself.

This is not to argue that there are no circumstances where officers should not intervene. There clearly are times when officers are in the wrong.

In the Rodney King incident in Los Angelas, four officers stood by while officers beat Rodney King into submission. They were never charged although they clearly should have been. The recurring question is whether or not that incident is comparable to the George Floyd incident.

Upon hearing this latest verdict in the George Floyd matter, the press predictably turned the cameras to the more than willing Floyd family and in a clearly staged and rehearsed moment, George Floyd’s brother said that he “can finally breathe again”.

This was an unjust death, but it has now been layered over with an unjust verdict. The public believe that in this case two wrongs do make a right.

Could this happen in Canada? Of course, it could and likely will. Trudeau and the current administration see racism in every element of society and are thus determined to eradicate it. This is their truth as well. Commissioner Lucki has agreed, well at least after a gentle prodding.

In the United States Georgetown University has already enrolled 215 police departments on a course teaching how police officers should “intervene” if observing misbehaviour of other officers. It is also called “active bystander training”.

As a principle, this seems like a worthwhile course. As a practical exercise it is fraught with peril. By definition it runs head long into the paramilitary structure of policing. What no one seems to be currently considering is that this very same para-military structure is often paramount to street survival.

So on the one end of the pendulum, “snitching” on another officer is removed as an obstacle. At the other end of the action pendulum could be an officer failing to take control and command in a violent situation. The reality is that the instantaneous form of decision making which is prevalent in policing, is usually not conducive to open, long, or prolonged debate. That happens in those white towers.

When police officers get in trouble, it is normally because of an inability to control anger. The anger is often instantaneous and unpredictable. I am not so sure that this course will alter any outcomes despite the best intentions. Maybe time needs to be spent on an officers psychological make-up early in the recruitment process. Maybe trying to intervene with an angered officer, with the wrong disposition, maybe too little too late.

One can rest assured though, that if any police officer in Canada finds themselves in similar circumstances in this country, the politically enlightened will embrace the George Floyd verdicts regardless of borders or history. The staging and production of the George Floyd trial will become a touring company, soon to be coming to a theatre near you.